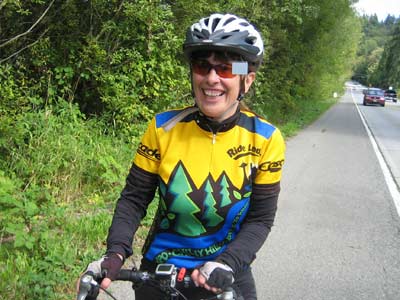 Let me tell ya, in 1990s Manhattan, it was too dangerous to ride a bike and too expensive to drive a car.

So moving to bike-friendly Seattle ten years ago was a blessing for Allyson Welsh.

When she was eight years old, Allyson broke her ankle in a bike crash. That is her most memorable bicycling moment. For decades after the accident, Allyson did not ride.

In 1996, while working as a trainer and software lead at Sealand, Allyson relocated from New York City to Charlotte, North Carolina – where the friendly flats inspired her to start biking to control weight. At only 5’2″, she found her fit in a Trek WSB (the company’s first Women Specific Bikes line) with 650C tires.

Two years later she got married and moved to Seattle after her new husband Dave accepted a position with Amazon.com.

“I’d never ridden a hill. My only challenge had been riding against the wind to Myrtle Beach. I was scared riding downhill from the Burke-Gilman Trail to Magnuson Park.” The 124th to Willows grade was even scarier. Allyson also had to overcome the coastal climate change, buying all new gear so that she could ride year-round. And, she soon realized the comfort difference between titanium and aluminum.

Gregg’s Cycles suggested that she join the Cascade Bicycle Club. She loves the camaraderie of the Club, as well as the appreciation that she receives from the riders for her volunteering. She also appreciates Jim Eanes of the Seattle Bike Club for his patience and advice when she first started cycling in the Pacific Northwest.

Allyson volunteers for almost every Cascade event. She enjoys meeting new people at packet stuffing parties. Some weeks, you can find her at the Club almost every day.

Allyson thinks of herself as a spokesperson for leisure cyclists – her rides bridge the gap between the leisure and more popular steady pace group. She sits on the Cascade Training Series (CTS) subcommittee, where she leads the Red Group rides at a 10-12 mph leisurely pace, preparing riders for their first century, often the Seattle To Portland or RSVP.

Allyson also leads the popular Redhook Lake Sammamish Loop and the Brewpub Ride Series. “There’s nothing like a good beer after a ride to quench your thirst.” Her monthly leisure rides attract 15-35 Club members who are interested in socializing, as well as exercising. The Brewpub Series tours different microbreweries.

“As a ride leader, one of your most difficult tasks is keeping the pace of a ride to the posted limit.” Allyson explains two reasons for this problem. First, ride leaders get so much stronger over the course of a season that by the end of summer, they don’t realize their own strength. The second reason: riders showing up for rides that are too easy for them. “This group wants to be at the front of the pack, instead of pushing themselves to ride at a pace that would be challenging for them.”

The next Cascade Ride Leader Training is scheduled for March. The Cascade Training Series also begins in March.

Scott Marlow was marketing director for Cascade Bicycle Club from 2001-2005. The Club record-holder for the shortest commute (under six seconds), Marlow works from his home office in West Seattle.
Nominate a cyclist of the month!