Wind and Rain and Sleet! Oh, My! 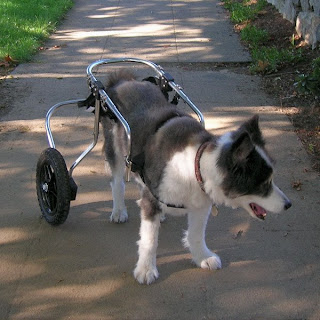 It was a four-footed pal that convinced Elizabeth Waddell to start bike commuting in 2007. Until last year, Elizabeth had served over two decades as a King County Metro regular, escaping the crowds by reading Natural History magazine, dog paraphernalia catalogs and murder mysteries. In fact, Waddell didn’t even like biking; she prefers walking as exercise.

Elizabeth’s 16-year old border-collie Spencer needed more attention at home. Elizabeth was tired of bus commuting. She recognized that bike commuting might give her some extra time each day. So she accepted the friendly challenge (ok, let’s call it nagging) of her bike mentor, Nancy Helm, and started cycling.

Elizabeth had not ridden a bicycle since she was a teenager, and she had to adjust to riding next to vehicles in traffic. Today, she is more upset by rude cyclists who startle her by passing on the right or not calling out when passing. Not as agile as younger riders, she fears she may sway into traffic when that happens.

Her commute from Wallingford to downtown is only 5.5 miles via the popular Dexter bike lane, but Waddell faced many challenges as an unseasoned cyclist.

The hilly section of Blanchard between Western and Second Avenue gives her the most trouble; Elizabeth still often rides on that sidewalk to avoid the cobblestone-paved street.

During cold winter days, even Waddell’s personal at-home weather station could not forecast when the showers at work would be hot or cold. But she can take the bus when predicted headwinds might double the atmospheric scientist’s bike commute from 40 to 80 minutes. Arthritis in her neck and back, which was aggravated by biking, and poor balance were obstacles she overcame with gloves and a more comfortable upright handlebar position.

This spring, Waddell joined nine other NPS colleagues to participate in her first Group Health Commute Challenge. Although she has one of the shorter commutes and was out of town for ten days, Elizabeth missed earning the highest mileage total for the team by just half a mile. She now knows not to schedule trips out of town in May.

Today, Waddell’s bicycle meets much of her transportation needs, running errands and grocery shopping at PCC. The mileage on her 1989 Honda Accord has dropped from 2,000 to 1,500 miles per year. Yet it is ironic that Waddell considers her lifestyle sedentary; in 2003, the Federal Highway Administration reported that females in Waddell’s age group averaged 11,464 miles per year.

Waddell is approached frequently by other women at the Wednesday Wallingford Farmer’s Market where her utilitarian bike set-up with foldable cloth panniers catches attention. “Women aren’t as interested in spandex and speed; they want to know how to get their kids around and run errands.”

Elizabeth plans to purchase a Burley trailer for hauling plants from Swanson’s nursery and looks forward to someday touring the San Juan Islands by bicycle.

Scott Marlow was marketing director for Cascade Bicycle Club from 2001 – 2005. Currently the Club record-holder for the shortest commute (under six-seconds), Marlow works from his home office in Ballard. Nominate your cyclist of the month!