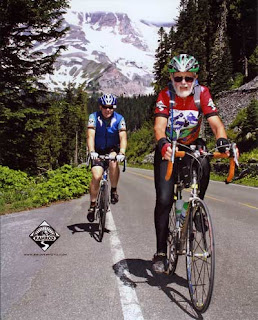 In 1980, the year Mt. St. Helens erupted, Bud Hunt recalls riding the first STV (Seattle to Vancouver), before it became known as RSVP. In the decades since, Bud’s cycling resume has expanded to include more multi-day long distance tours than one can remember.

Bud leads four to five Club rides per year, including his favorite ride: the annual Bud’s Dahlia Pedal, which ends at the Hunt’s garden, where he shows the prize-winning dahlias that he has grown since the 1980s. He also leads the Sawdust Hill ride on the Kitsap Peninsula and a Marymoor to Carnation ride.

In 1979, with his nephew, James P. Hunt, and daughter, Ann O’Connor, Bud finished the inaugural Seattle To Portland. Since then, he has completed almost two dozen STPs. “It’s a family ritual, like Thanksgiving or Christmas.”

Although he has yet to encounter a ride that he dislikes, Bud’s most memorable cycling event was his first one-day STP in 2003 (Bud turned 74 that year), struggling against strong head winds. He has finished three one-day STPs, besting riders half his age by arriving in Portland around 6:00 p.m. Saturday.

In 2003, Bud rode his first RAMROD, his favorite event. RAMROD bib numbers are assigned by age. Bud’s bib number? Number one…for the past three years, of course. In fact, all of the Geezers riding RAMROD receive bib numbers under fifteen.

When Bud first joined Cascade, the Club was primarily a recreational riding group, with meetings held at the Bush School. “The Club has become almost a corporation; it’s an institution with professional staff to run innovative safety and legislative programs that other clubs copy.”

A former runner, Hunt gradually transitioned to cycling. After running his first marathon at age 50, stress fractures pushed him into cross training (swimming and biking). Since he started meeting more people cycling, he eventually gave up running.

Retired from his Ballard practice since 1992, Bud is an active member of the Bicycle Adventure Club (www.bicycleadventureclub.org) – a San Diego-based nonprofit membership organization that coordinates affordable multi-day tours around the world, published in an annual catalog of rides.

Tulipmania drew Bud to Holland for his first active vacation with the Bicycle Adventure Club. Hooked on active travel, he has toured The Appalachians, Austria, Nova Scotia, and Italy, where “there’s no such thing as a bad meal.” In December, Bud and Sue join Cascade’s Lakes and Volcano District Ride in Chile. In 2009, the couple plans to join a tour in Ireland and go mountain biking in Moab.

The last two years, Bud has enjoyed mountain biking the Kettle Valley Trail in British Columbia, riding from Castlegar to Penticton and from Penticton to Hope.

Hunt recently visited Romania, but not just recreationally. As a volunteer for Medical Teams International, Hunt maintains his medical license in order to travel to poor and underserved communities where he provides dental services.

Hunt appreciates the general quality improvement in bike components. As he ages, Bud lightens his load to improve his riding experience. Losing his rear rack, replacing his aerobars and upgrading to lighter components, as well as carbon fiber and titanium frames make his bikes very responsive.

This Christmas, Bud and Sue continue their tradition of snowbirding in Arizona. Watch the Cascade Ride Calendar this summer for Bud’s next Dahlia Pedal.

Scott Marlow was marketing director for Cascade Bicycle Club from 2001 – 2005. Currently the Club record-holder for the shortest commute (under six-seconds), Marlow works from his home office in West Seattle. Nominate your cyclist of the month!